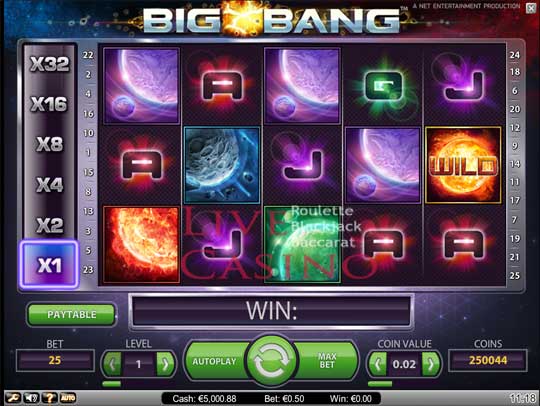 Bing Bang slots from Net Entertainment became live as from the 23rd of January, 2014 and now available at all online casinos powered by Net Entertainment. Most online casinos are still running promotions on this slot game at which players can receive free spins to try out the game free before wagering with real money and other casino games.

The game is available on both download and direct play online (flash) client. Big Bang slots comes with a new gaming feature released by Net Entertainment known as the progressive multiplier. The multiplier increases as you keep playing and this value reaches up to a value of 32x.

The slot game only offers the wild, progressive multiplier and does not offer other gaming features such as the free spins, scatters and bonus feature games. Big Bang comes with 5 reels and 25 paylines offering betting limits that suit all types of players. The game is based on a theme of the galaxy and during game play you will come across a variety of symbols found in the galaxy and also makes use of the common symbols such as the Ace, King, Queen, Jack, and Ten.

The progressive multiplier meter is situated at the left hand side of the game and increases each time you hit a winning combination. On your first win, the multiplier value is 1x and a second win gives a multiplier value of 2x, and the next wins awards multipliers of 4x, 8x, 16x, and 32x respectively. The multipliers give players a chance of triggering bigger wins. The more you keep playing the game is the more you are likely to trigger bigger jackpots.

The wild is represented by the sun symbol that substitutes all other symbols to complete possible wins. If you love playing slot games from Net Entertainment then consider playing this new exciting game today!